Last spring I chose Tsukayu Saddlebags built of fiberglass to replace the Osprey Hard leather saddlebags I'd been using.

After a couple of years using leather style bags I'd accumulated a couple of issues with that type that pushed me to make the change.

The first issue was due entirely to the environment my Yamaha lives in, NOT any problem with the construction of those leather bags.

We live full time on the road. My Raider lives out in the weather 24/7. It has no garage or other shelter to protect her. If it's raining, snowing, blowing dust or hammering hail, she's exposed to it.

... and so are her saddlebags.

The leather bags I'd installed shortly after acquiring the bike were built with very good quality. But it became clear that in MY situation they weren't going to endure long term. Being exposed non-stop they were being ruined, no matter how much Skidmores I slathered on 'em. The constant exposure  to the elements was taking it's toll. 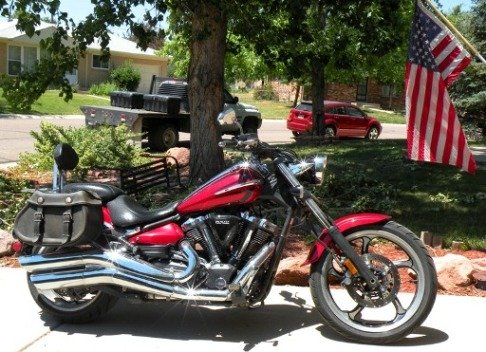 At the rate the lids and other parts were shrinking and warping it was obvious I'd be buying new bags before long whether I wanted to or not. If you park your bike inside at night, leather bags will be just fine (as far as that issue is concerned).

I decided to go with fiberglass and sell my leather bags while they were still in decent condition, to someone whose bike gets parked in a garage!

After looking at the prices and reviews of most all of the available makers I chose Tsukayu Saddlebags.

Personally, I found far more that are fully satisfied and happy with their purchase from Tsukayu. I am one of those satisfied customers.

They do indeed ship out of Hong Kong. If that's an issue for you, the solution is real simple; Buy another brand.

The saddlebags came packaged in fiberglass shipping boxes, early in the week promised, at a price significantly cheaper than similar competition and shipping was free. There were no issues with the product or shipping.

Along with their durability in the environment my bike lives in, there were three other issues I wanted to address in doing this swap;

1. I wanted a bit more capacity in the bags. On the long rides I like to make, I needed a bit more space to make packing up a mite more convenient. For one, I hate the look of bits and pieces lashed on all over a bike flapping in the wind. Secondly, I didn't want to have to completely unload the bike on a long trip if I was gonna motel it for a night.

2. Over time, parking the bike where I was going to be out of sight of it for a while became an issue for me. I realized I wanted to have lockable motorcycle saddlebags.

3. Also, after having rode through that 3,000 miles of rain in Alaska along with no few thundering cloud bursts in the lower 48 I got tired of either having to dig out rain covers and stretch 'em on... or having wet gear. Let's face it, Leather bags ARE NOT weather tight. I came around to wanting saddlebags that are sealed up, locked up, weather tight storage.

Searching for bags that met those requirements I looked for bags that would also not conflict with the lines of my Yamaha Raider, or the limits of my budget.

The "Coner" model of Tsukayu Saddlebags were the version I settled on. They gave me everything I was asking for along with fitting in to the lines of my ride the best of anything I found within my budget parameters. 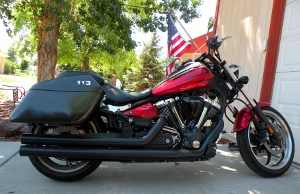 At $548 for the ready to paint version and another $81 to get the built in LED Turn signals they're a real decent price.

The Tsukayu saddlebags were the second part of my spring refit of the bike. Prior to the saddlebag change I'd already replaced the Factory Exhaust pipes with 3" Hard Chrome Big Straights; both for the look they give the bike as well as lowering the exhaust pipe height. I needed to open up the room to install the bigger Tsukayu saddlebags in a lower position than would be possible with the factory pipes. 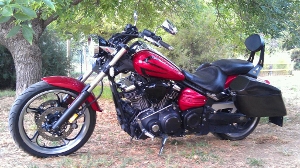 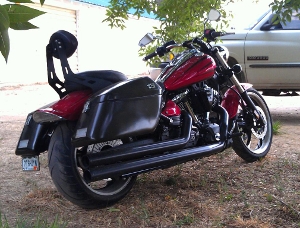 The built in LED turn signals I ordered with the Coner", Tsukayu Saddlebags allowed me to shave that ugly plastic plate hanger and also the lollipops hangin' off the rear fender. That cleans up that part of the bike a lot. You might notice that I also shaved the chrome strip off the fuel tank... 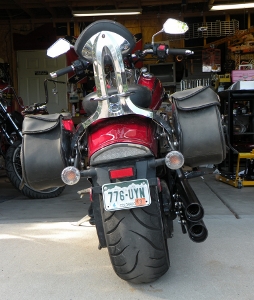 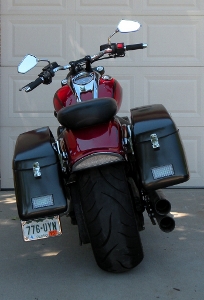 I really like the new look of the bike. I've discovered that I'm a lot more of a matte black sort of rider than gleaming chrome... I'm too lazy to do all that polshing! I'd rather be riding! ;)

I picked the primed and ready to paint version because I hadn't yet decided if I was going to go black or try to match the bikes color... In the end I got tricked by a weird paint chip in the sunshine in the parking lot of a paint store.

I'm NOT an automotive painter and honestly didn't realize the amount of work it takes to do a good and proper job. Not to mention the COST of quality automotive paint. My son-in-law who has a good bit of experience did the job for me.

Had I to do it over again, unless I was doing a total paint job on the bike, I believe I'd order one of Tsukayu's pre-painted or vinyl covered options. 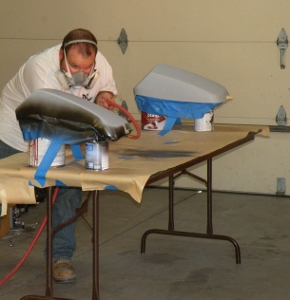 I was trying to match the metallic paint on the engine case. Well... if you're at the right angle on the right day it matches... otherwise the paint color I picked is juuuuuust a bit off! ;) Someday down the road I'll repaint the whole Raider and that'll change. :)

The only issue I had fitting the bags to the bike was the mounts themselves from Tsukayu. The bags I picked are also the "Universal Version; ie. they'll fit on just about any bike. On my Raider the mounts didn't offset the bags quite enough. I had to be real careful closing them to make sure the lid didn't hit the forward fender bolt. 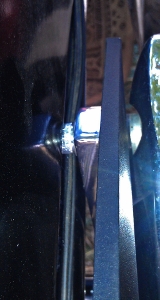 To prohibit that I simply fabricated some 1/4" shims from aluminum bar stock and placed them between the bags and the stainless steel saddlebag mounts. That tiny bit of interference is history! 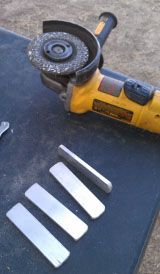 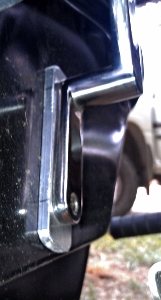 To move the license plate was a simple fabrication of a steel mounting bracket for an LED illuminated plate frame I picked up at a local bike shop that NORMALLY caters to the Harley crowd... ;) 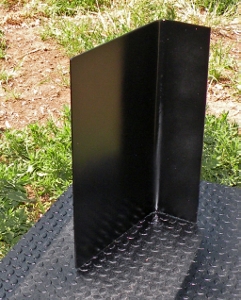 I've ridden these Tsukayu Saddlebags for nearly a year now. They've been through heat, hail, rough mountain roads and pounding hail. They've kept my gear in them clean, dry and secure while helping the bike look good going down the road.

I've had but one problem and that's not with the bags but with the bolts (NOT supplied by Tsukayu) that replaced the Yamaha Fender bolts. The thick stainless steel saddlebag mounts required longer bolts.

I bought bolts that were stamped 12.9 grade. (that's equivalent to SAE grade 8) One of those bolts sheared just a couple of weeks ago after nearly a year of service. Considering they have a rating of something like 170,000 psi they shouldn't have EVER sheared in this application.

Luckily I wasn't too far from "Home" and got there without the other bolt on that side failing.

I supported and secured the bag with several lines of parachute cord to both support the remaining bolt and secure the bag if the last bolt did fail; While I rode home. Good thing I was riding solo and no one was sitting back there! ;)

When I drilled out the broke stub left in the fender to remove with an easy out... it drilled Waaaaaaay to easily for it to have been a hardened bolt.

Sooooo... either the bolts I'd bought to do that install were manufacturing defects that slipped through without proper hardening... or they were examples of the out and out counterfeit bolts that we hear about every once in a while.

I've now got fresh 12.9 bolts from another source. Hopefully that close call with my Tsukayu Saddlebags won't be repeated.

So that catches you up with the Tsukayu Saddlebags change I made to tailor my Raider to fit my way of going. 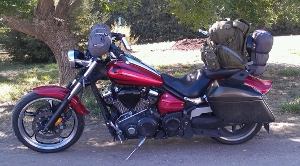 Sonja's ready for the road... and me too!

I've got a few more items on my wish list... but those are going to have to wait until my wallet catches up.

Return from Tsukayu Saddlebags to Motorcycle Touring on Freedom Road

Copyright 2008 - 2013 motorcycle-touring-the-good-life.com All Rights Reserved Not to be reproduced for commercial purposes without the express written permission of the Author