I suppose that Hard Chrome Pipes are not the first thing most riders think of when you say; Motorcycle Touring.

But truly! That was the biggest part of my motivation.

I wanted/needed to upgrade the touring ability of the most awesome machine I've ever ridden. The fact that the bike now sounds Awesome too is just frosting on the cake!

I'm also thinking a Yamaha Raider is not the first bike that jumps to mind when you mention long ride touring either! ;) But... she did haul me to Alaska and Back in road eating comfort.

I'm thinking anyone who is familiar with the Yamaha Raider is aware of the configuration of the Factory exhaust pipes. Unlike the 3", Big Straights, Hard Chrome pipes I've put on, the factory exhaust pipes have a big hump in 'em that follows the lines of the bike; and that's fine... until you go trying to mount saddlebags. 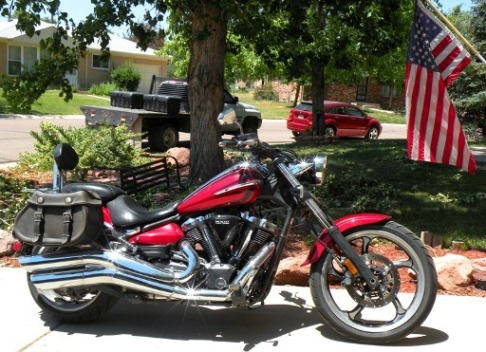 A couple of years ago I built some brackets and mounted that pair of good Osprey Leather Saddlebags. They have worked well with only two issues.

First, they are a bit on the small side. I've always wanted just a mite more space for touring. That just wouldn't fit with the old pipes.

The second issue is... durability. My Bike resides outside. 100% of the time she is outside. We live, full time in a fifth wheel on the road. If I'm not riding her, and she's not parked beside the fiver in a camp somewhere, she's sitting on the back of the truck going down the road.

And THAT is the problem. Rain, Sun, Wind, Dirt... a fella can spend all his time trying to maintain leather saddlebags or... he can ride... Simple fact is, the bags were 'weathering' faster than I liked. I couldn't keep enough leather cream on 'em. They faded and shrunk and it got to bothering me...

If you have a garage that a bike is kept in, leather saddlebags are no problem, they'll last for darn near ever. I have a friend from British Columbia who bought Osprey bags the year before I did. His bike is in the garage when he's not riding. His bags look like they did when he first installed 'em. Mine... show the results of the life they've had.

When they get no shelter at all maintenance becomes a big deal. So... I decided I wanted to change to Tsukayu fiberglass hard bags.

But... because of the Yamaha pipes... that was an issue. Especially if I wanted to also increase the capacity of the saddlebags in the bargain. There just wasn't room. Installing the Hard Chrome pipes dropped the top of the top pipe something like 6 or 8 inches. It gave me lots and lots of new space to mount the Tsukayu Coner saddlebags I'm impatiently waiting to arrive.

The installation wasn't that big a deal. Even for a Non-mechanic! First... check out the pipes and make sure they arrived undamaged and everything is there ready to do the Motorcycle exhaust pipe installation.

I ordered these Hard Chrome Pipes through Accessories International down in Florida. They gave me the best price and had 'em here in perfect shape in the time they promised. Worked for me!

Make Sure you take the time to Carefully Inspect the new pipes for shipping damage or anything wrong as you take 'em out of the box. Note and photograph anything you find as you do... Just a CYA deal.

The toughest part I ran into was figuring how/where to reroute the O2 sensor wire to reach so it would fit into the O2 sensor port location on the new pipes. But with a lil' time looking at things that got taken care of.

That and getting the pipes aligned to fit into the heads and get 'em wrenched down. The left hand nut on the header pipe flange on the rear cyclinder was the tough part there. 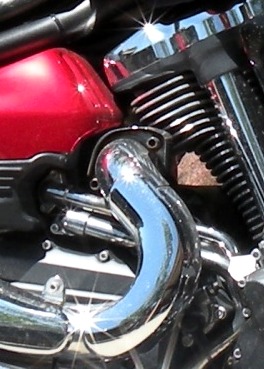 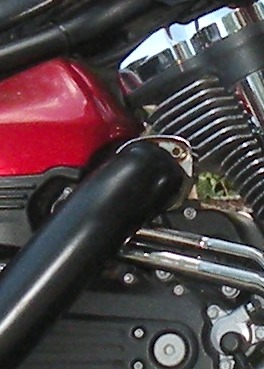 Took some real gymnastics with some fingertips... working blind to get it started... but then it was easy to tighten down using a ball end T-Handle allen wrench... 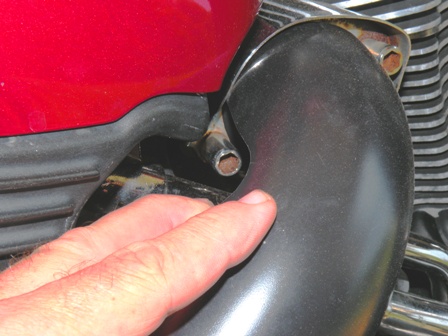 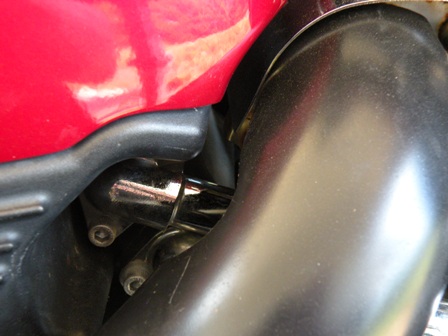 You'll want to make sure you've got one of 'em handy. There's just not enough room to fit a universal in there with an allen socket on it... you're gonna need that ball end allen!

I just used the original allen type factory exhaust flange nuts on that rear cylinder. I suppose, if a guy went to a regular nut, and had a short enough flex/universal, he might have an easier time of getting that left side nut in place... or... just have to wrassle it like I did! :)

Don't forget to replace the old washers, with a fresh set of header pipe sealing washers. Those need to be replaced any time the pipes are removed.

You'll have to get those OEM at a Dealership, they won't be coming with your after market pipes.

Once ever'thing was jiggled and aligned; tightened up and double checked it was time for her Portrait; 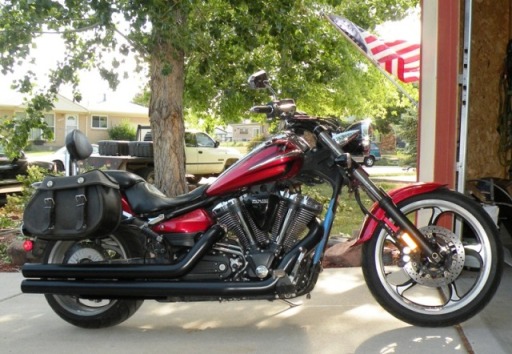 All that extra space 'tween the pipes and the bags was my primary motivation for doing this exhaust pipe change. To make room for the new saddlebags I'm waiting on... But Damn! She looks good with those Black Pipes on there! Excellent! :)

And then it was time to fire it up and test her out with the new Hard Chrome pipes.

The last thing is a "Fuel Commander" or a Fuel Management system. There's two schools of thought on that I guess. One is; Ride the pipes for a short while and see how the bike rides before you spend the few hundred more bucks for the additional parts. The other is just put 'em on.

My thinking in whether I needed a fuel management module with these new Hard chrome pipes went like this;

1. Most of the guys putting after market pipes on a scooter like mine are going for the "Swept", cut off, shorter pipe styles rather than these Big Straight Hard Chrome Pipes I figure that means even less restriction and more flow...

2. The Long, 3" Big Straight Hard Chrome Pipes I put on would be of similar length to the Yamaha Factory Pipes...

3. So... I was guessing that the pipes would perform within the parameters that the Yamaha Factory system would be able to adjust to.

So... I'm riding without the additional fuel management system for now... and from the rides I've made in the last two days I believe I'll continue without spending the extra several hundred dollars. I've gotten maybe one or two "Pops" in the 200 plus miles I've ridden these pipes... and that was only when the motor was cold, right after start up. I've not seen any issue to need that extra money.

If I was to add some more performance squeezing parts in combination with these Hard Chrome pipes I'd guess it might become necessary. But the truth is, this bike already contains more performance than I have the ability to ride so I'll just hold my ego in check and ride the horses I've got! ;)

... While I'm rolling down that ribbon of asphalt... wondering where my new Fiberglass Saddlebags are!