When I started looking for Raider Saddlebags, I found quite a few guys on several motorcycle forums doing the same thing. I guess the bike is new enough, only three years old, with few enough of 'em sold in the grand scheme of things... that no company has seen enough green in it... to do the R&D to fill the demand.

Ever'body has had the same problem... bags that would fit over the existing pipes... and/or... around the factory backrest. (the backrest being the biggest issue)

... to tell the truth I think that this is about the only place I can see in the design of this Motorcycle, that Yamaha dropped the ball... I wonder who the bonehead was that decided no-one was gonna put bags on a Raider... and then designed the backrest to get in the way if they tried to?

Yamaha does have some factory Raider saddlebags; but they're small, synthetic... "football" sort of things... that are made to pretty much just throw over. To me, they look like a genuine "Afterthought"...

Not what I was wanting for my Ol' scooter.

I was really expecting the Saddlebags, like I wanted for my Raider, to be a lil' bit of a hard find; all because of those high pipes and that big chromed backrest.

'course, the hardest part would be working out the saddlebag mounts to allow what bags I might find, to be bolted up.

When all was said and done... that turned out to be not so much of a difficulty after all... I simply copied the mounting method that has been used for a few other bags over the years... Bolt up points on a heavy rod hoop, bolted up to the bike with the fender strut bolts.

I only needed to weld those bolt locations below the chrome shroud that covers the fender strut bolts... and creates the problem in the first place.

That heavy, rod "Hoop" was no problem... Only had to modify the existing throw over bag mounts that were on the bike when I bought it.

With those mounts figured out, it turns out that there is no real shortage of Raider Saddlebags to be had. Only had to settle on style, and price... then go find the motorcycle saddlebagsthat would fit my view of what should be bolted to a Star.

Truth is, I found bags from several makers that would fit... so in the end, putting the saddlebags on my Yamaha Raider, ended up just being about picking out a style and a maker.

Funny how things that start out looking like a real big deal, turn out to be a pretty simple thing... if you'll let it.

I've been looking 'round, for the last few months; ever since I bought this bike... and I've found a few likely prospects...

Corbin builds a sweet set of bags for the Raider, that bolts up like a part of the bodywork of the bike... not cheap with the price being nigh on $1800... + shipping... but you'd have an awesome bike!

Me, I tend toward a lot leaner, and more traditional style. Plain Ol' Leather makes me happy. I've not got anything against the sealed up solid hard bags... there's plenty of times when I've gotten wet, I wished I was more flexible in my choices... but ... in the end... you'll likely find me riding a bike...

... with no windshield, no fairing, and the saddlebags on my scooter will probably be... Leather.

Besides the style not being what fits my way of going... that Corbin Price tag got in the way of my budget... The last few years have not exactly left me flush! :o)

A guy I know put me on to Osprey Ltd. back east in Massachusetts. He'd put a set on his Yamaha and told me he'd buy from 'em again... so when I looked at their website, found the style that was pretty much what I was looking for... and at a price that pleased me, considering all the junk I've found out there for as much if not more... They moved to the head of the line.

Once I got my mounting system worked out... I gave 'em a call... and they had me a set of bags in right on 10 days! Not bad for a small shop. 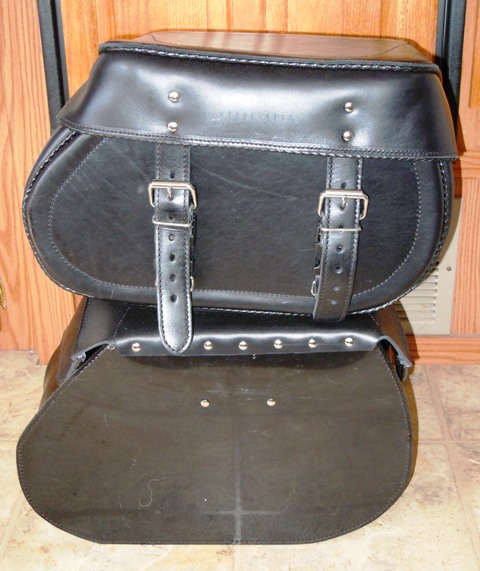 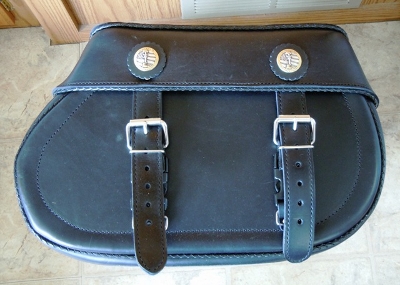 As for the quality... I have to say, I've seen better... I've seen a lot more that didn't measure up to these bags I have here... and the ones I have seen that I'd consider better... showed that in their Price too! :o) like more than double!

I can see a few things I might change, had I the time or money... but... At a price of $425 with the shipping included... for full grain Leather Raider Saddlebags... You get something for each and every penny you send him.

The full grain leather bags are reinforced with ABS on the inside of each panel... the backs are flat ABS for universal mounting... and the Raider saddlebags are also steel reinforced on the inside, around the lid openings.and down the back and across the bottom, to keep things from sagging.

Two of the four mounting bolts for my Raider Saddlebags pass through the back/bottom steel bracing... so my mounting should be solid.

I used four 3/8 bolts on each bag, with 1 1/2" fender washers and neoprene washers inside and out. The top bolts each have a thin spacer, about a half inch, between the bag and the mount, to set everything straight on the saddlebag supports I modified for my Raider Saddlebags.

To clear the factory pipes, I had to mount the bags a bit higher than usual... They feel pretty solid, but over time, with the mounting points so low on the bags... below center... I may find they want to pull away from the bike at the top when loaded... 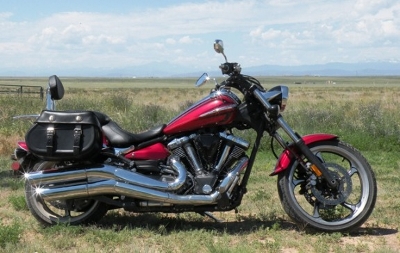 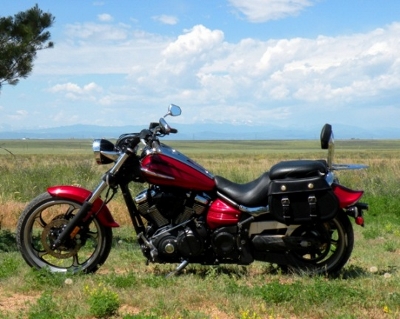 Time will tell, but if it looks like that is happening I'll add a small brace to the top of each bag, to keep them from sagging away from the fender at the top. (if you look at a lot of Hard Bags... it seems to me they have similar bracing on quite a few of 'em) 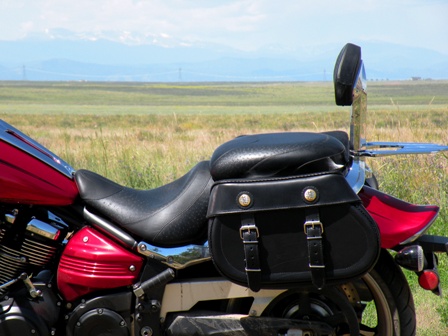 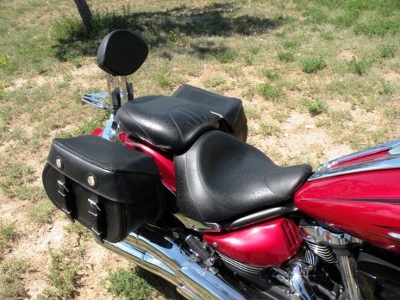 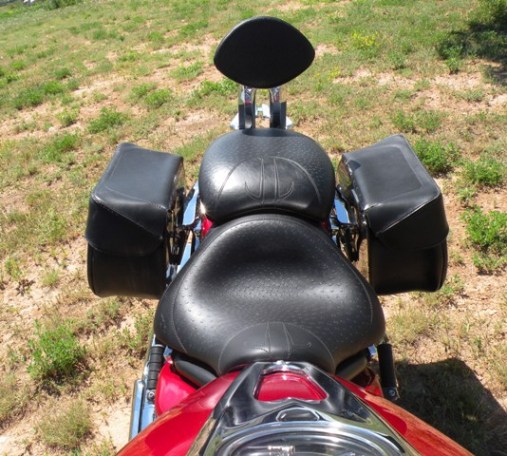 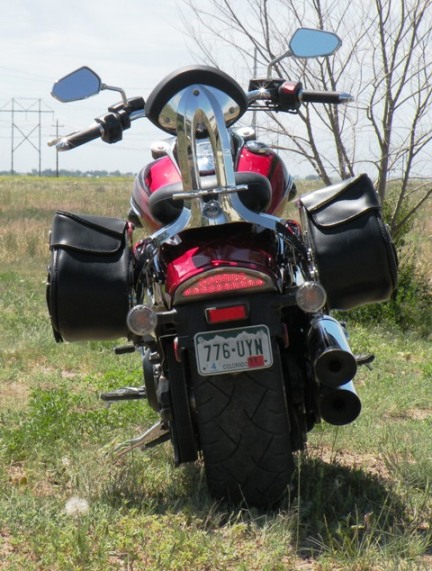 The Raider saddlebags sit, tight to the Yamaha Backrest mounts... making for a clean set up. I was hoping my laptop would fit in one of the bags... not gonna happen... It's not real huge... but the curve of these "Medium" sized bags prevents it... However, pretty much all of my other camp gear will, with only my tent and "Chair" not fitting... which is what I was figuring...

That leaves just my ruck and clothing duffel... for a nice tight Road Pack on top of my Raider Saddlebags.

[?]Subscribe To This Site
Copyright 2008 - 2013 motorcycle-touring-the-good-life.com All Rights Reserved Not to be reproduced for commercial purposes without the express written permission of the Author