For the Price you pay for a Nolan N103 helmet that's supposed to be a top notch motorcycle helmet, a fella kinda expects quality to match the price...

For sure he don't anticipate a series of issues. Sure things go wrong, but One is enough ain't it?... I stacked up four. Either the advertising is inflating the quality... or I'm awful tough on helmets!

Now I realize that ever'thing man made is gonna fail and break. The thing is, if you buy what's been cranked up to be a better quality you expect a lil' better performance than those motorcycle helmets that are priced maybe a hundred bucks less.

I rode this helmet pretty much daily, commuting in all sorts of weather as well as a ride to Alaska and back through some pretty poor weather. Though I never took a fall with it, it did get used a lot... so keep that in mind I guess as you're reading my criticism. Maybe I expect too much?

I've gotta say, this Nolan N103 has performed for me at a level I might expect of a lesser helmet.

The four faults that developed with my Nolan N103 Helmet.

That first problem, with the anti-fog visor liner, appeared on the Alaskan Highway. It seemed to be getting dark fairly early, in a place famed for not getting dark!

At a stop along the way I pulled the Nolan N103 off and suddenly the light was so much brighter! When I looked at the thing the problem was obvious. Muddy water thrown up off the pavement by trucks passing the other way had leaked down past the exterior visor seal and run between the visor and the anti-fog visor liner.

What a PITA to have to pull that loose, clean it, and reinstall all the time trying to maintain some visibility. In the end, the dirt getting in there scratched a "Halo" around 3/8 of an inch wide or so on the exterior visor...

Just a word. My new and much cheaper HJC CL 16 has the same sort of interior, anti-fog visor liner. The difference is that it has a silicone bead that seals it to the exterior visor. I've only had that helmet two weeks, so we'll see if that's the cure...

... but That three years later, the issue seems to have been addressed on a helmet that's priced probably a hundred bucks or so less, says something to me.

Issue #2; The Visor Flies up when doing a "shoulder check". This started cropping up when the helmet was just over a year old. It's kind of startling when you're splitting the wind down the slab and take a glance over your shoulder before making a lane change ~ and the visor on your Nolan N103 helmet snaps open at 75 mph! 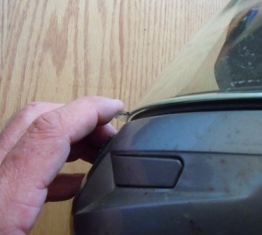 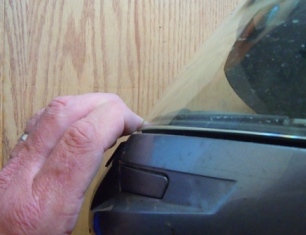 You can see the gap in the first photo... and then where it should be... the problem is I've got it held down/clamped down with my fingers... as soon as I release it pops back to the position in the first pic.

The thing finally got to where it just wouldn't seal down at all. I took it apart and inspected the mechanism and really couldn't see where the wear or failure was... but since I'd bought the helmet at a rally, I didn't have a store to go to with a complaint... and what can I say... dealing with such things by email and shipping with a company out of Italy... well ... arrrrgggghhhh. That's another PITA I'd rather do without...

I just squeezed all the life out of it that I could and after three years replaced the helmet. For the price I'd rather a helmet endured a bit longer than that.

Issue #3; The secondary "sunglass" visor mechanism jammed and won't operate. Over time the operating mechanism on the side of the Nolan N103 helmet got stiffer and stiffer. I had to really struggle to operate the sunshade visor. Eventually the only way I could get the damn thing down was to grab the visor itself with my finger tips and drag it down. 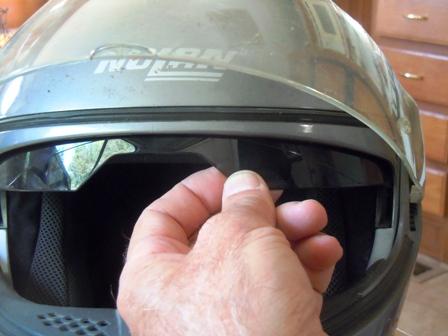 I like the visor itself... sunglasses inside a helmet generally create sore spots on my old ears... but having a scrap with the helmet every time you try to raise or lower the visor is NOT a good alternative... 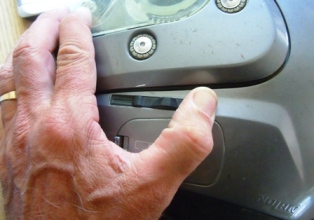 You can't see it in the picture... but I'm applying a LOT of force to the slider with my thumb... and that sucker ain't goin' anywhere! Like with the mechanism of the main visor I inspected it looking for grit or other interference, wear, etc and there was/is nothing obvious to fix... it just don't work!

Again, its my opinion a helmet, especially in this price category, should endure without issue longer than two years... not have mechanisms get stiffer and stiffer and completely jam up most of the time, and in under three years.

Nolan N103 helmet issue #4; The Modular face shield has gotten extremely stiff and resists opening. This was, you might say, the straw that broke the camels back. At a couple of stops I started having occasional great difficulty getting the helmet to open at all. I'd squeeze the two tabs together and yank and yank until the thing finally popped up.

Not a good deal for a fairly claustrophobic biker cowboy! :) It's bad enough having to wear a motorcycle helmet in the first place! But... having that plastic bucket locked on your head is guaranteed to provide a rather entertaining bit of gyrations for innocent onlookers! :)

Their patented, quick release strap retention system has continued to operate without a glitch. I wish I could figure a way to transfer it to my new helmet! :) but... just releasing that still leaves a pretty uncomfortable "drag" to pullin' it off your head if you can't get the face mask up.

So... would I buy another Nolan N103 helmet? The apparent fit and finish was I thought very good. So, either I'm awful hard on helmets; I managed to get the occasional lemon every manufacturer produces... or the endurance of the Nolan Helmet is just not what it should be.

My choice? When it came to replacement I went back to the maker of my previous helmet, HJC; and at a price that kept a lot more of my thinning wallet in my pocket.

I know my previous review, written very early on, was positive. It's also true that most of the reviews of the Nolan N103 helmet are good or glowing... What can I say. I can only tell you what I've seen from my own use. The whole deal for me, over three years of use has left me... unimpressed.