When I'm on the road a Motorcycle Camping Stove is pretty much a necessity. I have the common habit where I ride fifty miles or so 'fore I eat breakfast.

But, that ain't gonna happen unless I've got at least a couple cups of coffee to start out on! To tell the truth, it's not uncommon for me these days to go ahead and have an oatmeal breakfast in camp before I leave... but don't go tellin' those ride fifty miles before breakfast fanatics of my failings! ;)

Bottom line; I have to have a motorcycle camping stove for that sunrise coffee and those meals in camp. Occasional meals aren't cooked hot, but generally those are the noon time breaks when I'll often eat crackers, cheese and summer sausage.

Otherwise, the only way I can afford to travel as much as I like to by motorcycle is to camp, NOT motel it; and prepare most of my meals in camp and not eat much at cafe's and such.

On a recent circle through Wyoming and Idaho I developed the need for a new Motorcycle camping stove. The Whisperlite stove I'd carried for better than 20 years finally gave it up. I'd only replaced the pump for it once, but when it refused to flow fuel in a camp outside of Cody on that recent trip I decided to finally just cut my losses, dump it and seek out a new stove.

There is one other thing... I never liked the way that whisperlite had to flare to warm up before it would burn right.

There's times when, even if they say you can't you've got no real option but to do your motorcycle camp cooking in the vestibule of the tent.

On the Alaskan Highway, when it rained for 3000 miles straight... if I tried to cook out in the rain... well... let's not go there... But, I still had to sit out in the rain with that whisperlite until it warmed up and the flare burned down to a proper burning stove...Then I could move it into the vestibule and cook a dinner that wasn't half rainwater! ;)

In picking a new motorcycle camping stove I wanted to get away from that lil' bit of operational theatrics!

My first attempt was a minimum cost and maximum simplicity stove setup made by Sterno that I found at the Walmart there in Cody... The only problem with that stove arrangement was that outside of requiring the patience of an oyster and only using it in near perfect conditions... as a cooking stove it was a FAIL!

It might keep stuff hot that's been heated elsewhere... but cooking it up from cold to supper is an ordeal. 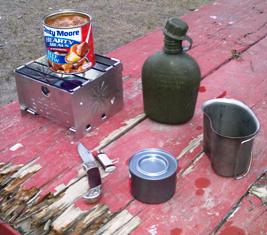 If there was any wind at all... the sterno stove simply lacked the BTU's to heat anything, let alone cook it. 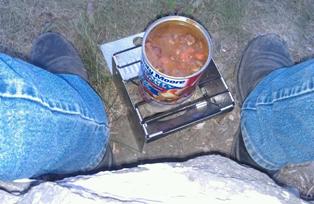 The first night I tried to use it I ended up sitting on a big rock in Beaver Dick campground in eastern Idaho with the stove cradled between my feet, hovering over the struggling flame with my fleece jacket spread like the wings of a 160 lb bat desperately trying to shield that cold blooded cooker from the Idaho wind and heat up my supper.

Then, just to sweeten the deal... apparently the engineers that designed the thing saw no need to actually test the unit. With a weak breeze, on a fairly warm day... in the 70's... after fifteen minutes of "Cooking" a can, my supper was barely starting to warm up...

... I had to do significant cowboy engineering to get a hot supper that next time I tried to cook on it. First thing I had to do was build a Motorcycle camp kitchen to house it that would cut the wind! Not so hard if you happen to be camped in the City of Rocks up in Idaho... but... out in some flat country without rocks or trees to hide behind... you've got a problem. 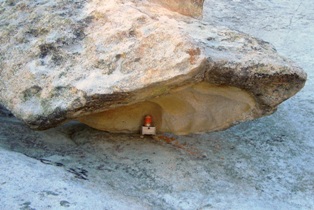 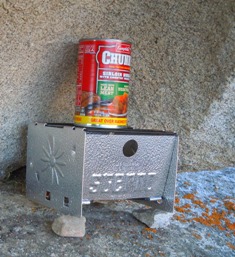 Once the kitchen was built, I had to level the stove on that well drained "floor"... to keep my supper in the can! :)

Then I still had to raise the level of the fuel can with some local rocks... to get it close enough to the "pot" so what heat there was wouldn't drift away on the remaining breeze. 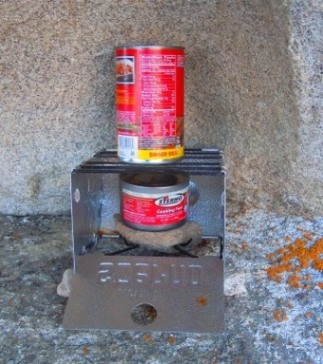 If you're really patient or have a dislike for hot food, it'll do the job I suppose, but I'm just not one to be standing around struggling for a couple of hours to eat cold stew. ;) If you're preparing some Mountain House or other brand freeze dried meals that require boiling water to properly prepare... It likely ain't gonna happen.

... as a motorcycle camping stove ~ That Sterno Stove is NOT.

There is another option if maximum simplicity is your goal in a Motorcycle camping stove. Several companies make packable versions of a small wood stove. REI sells one and I'm sure you can find others. You can also find plans for Hobo stoves online that you can make up that usually utilize a #10 can.

The problem with these that I see... is #1 finding fuel reliably in different campgrounds... #2, considering the poor and overgrown condition of the forests, and the resulting general condition of "Fire Bans" being in
affect... the dependance on a wood burning stove, however small, seems a little risky.

... and #3, dealing with #'s 1 and 2 on a rainy evening after three or four hundred miles in the wind... Is just too much hassle for a grumpy old biker cowboy like me. I don't require diamonds and servants... but a lil' convenience is well appreciated!

All that led my replacement Motorcycle Camping Stove search back in the direction of another regular backpacking stove. But geeze! Have you looked at the price of those things? Easily a hundred bucks and more for most of them... and all you get is a tiny little burner and some flimsy frame work... It just doesn't seem justified... and I just couldn't bring myself to spring for that any more. I think I'm gettin' stingy in my old age!

There's also that other complaint I always had with that whisperlite, even when it was running fine. Starting the thing always required a hell of a little inferno going until it warmed up sufficient to gasify the fuel and burn right. THAT always made me a bit nervous.

If my "touch" was good I could get it going with a smaller and shorter lived blaze... but sometimes, it was impressive! :)

OK if the thing is sitting outside and you're not terribly concerned that you're in danger of igniting the forest floor... I guess it's ok... but...

So I kept snoopin' around... another thought that came to me as I was searching was...

... I know you're not supposed to run a stove inside your tent, whether it's a back packing stove or a motorcycle camping stove. But, when you've been riding all day, you're cold, you're tired, and you're hungry...

... the skies have opened up and the rain is falling with drops the size of small buckets... cooking outside just isn't a viable option. Or, when you get up in the morning to a hard rain and you REALLY want a hot
cup of coffee...

The only place left to me is in the vestibule of my tent... and doing that always was an "Issue" with that gasoline Whisperlite... considering that inferno that seemed to be a prerequisite of getting it going.

... so... I've been looking for an alternative and that took me me to propane stoves. Just turn the valve, flick a match or click your bic.. and adjust the flame...

Keeping the two requirements for my next Motorcycle Camping stove in mind; lower cost, keep it simple, and no raging fires to get it started, the Coleman stoves came up when I was doing an internet search.

Uhhhhh... that tallied up three requirements didn't it? heh heh...

They build a Micro and a regular one burner propane stove that would work just fine for motorcycle camping cooking. 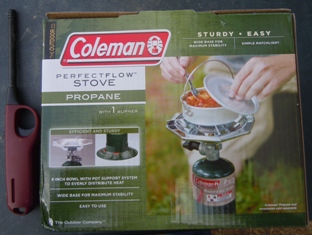 The specs on 'em claim they both put out the same BTU's @ 10,000 but... they do it for two completely different costs!

So... less than half the fuel for something over twice the price... that's a difference of around 400% ain't it? If you're a NASA engineer, makin' the big bucks and takin' a ride I guess such calculations don't enter into your thinkin'... but broken down and usually "broke" Biker Cowboys see that as better than another fifty miles of fuel for the scooter! :) Which means If my motorcycle camping stove can help me make a few more miles, I'm all for it!

The sacrifice is in size. The Coleman Micro burner and it's small cylinder are going to pack into a tighter place than the larger burner and fuel cylinder of the regular stove... but I'm thinking that making the volume of coffee us old guys want of a morning and hot water for shaving in addition to meals... and NOT paying something like four times extra for the fuel is worth the small loss of compactness.

If absolute compactness is your priority and you can live with the fuel cost, that Micro Coleman will likely do the job. It was priced a bit over $28, and that's a long dang ways from the $100 plus stoves at the backpacking stores...

I've used Coleman stoves and lanterns for as long as I can remember. They always seemed to have good quality at the best price. Besides the regular single burner stove using the much cheaper fuel container, the price of the stove itself saves a bundle.

At WalMart the stove cost me $24 bucks! Every stove worth looking at over to REI, (one of my favorite equipment sources) and any of the other backpacking equipment stores seemed to be at least $75 and generally well over a hundred, and some approaching two hundred! At $24 Coleman works for me!

Just for fun I ran a little Motorcycle Camping Stove competition 'tween the Sterno Stove and the Coleman Stove... Sitting side by side I lit 'em up and then set matching U.S. Army canteen cups full of water on to boil.

OK... the handles don't match... but the cup itself is identical! Gimmee a break! :) 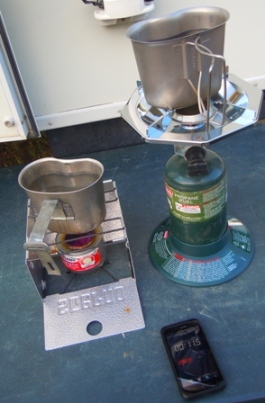 ... the race was well started when I realized... How can you have a race 'thout any beer! 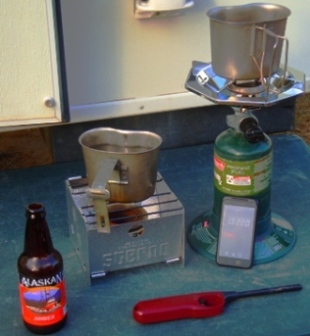 The Coleman Propane, perfectflow stove, a one burner Motorcycle Camping Stove took 3min and less than 48 seconds to take that canteen cup to coffee making boiling. I actually fumbled the camera and that water went to boiling several seconds before I managed the stopwatch picture! ;) 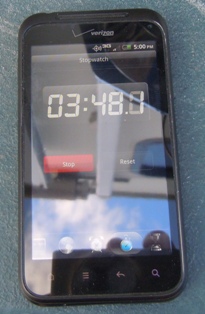 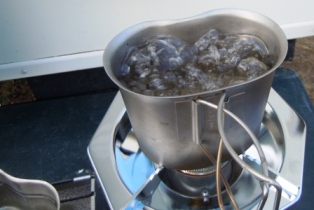 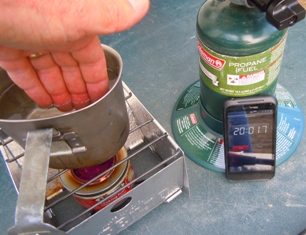 ... at 20 minutes the Sterno stove hadn't got the water TOO hot to hold my fingers in the water...

Sterno time to boil; uhhh... it never did... after thirty minutes in "Their" configuration I had water hot enough to be uncomfortable to hold your fingers in for but three seconds or so... but NOT coffee boiling, and that was with No wind and fairly warm temps... and I gave up.

Though I had to sacrifice a lil' compactness, I like the solid weight and construction of this lil' stove; The ease of getting replacement fuel cylinders; And the reliability of it providing the Motorcycle camp cooking I need.

So, until it lets me down I'll be cooking my meals on the Motorcycle camping road with this lil' propane, Coleman Motorcycle Camping stove.