My Motorcycle Boots are Over Three Years Old and Still Going

Time for a Motorcycle boots update of the boots I've been wearing since 2009/2010. They are also my daily wear boots.

The Rocky Boots were bought at Bass Pro in the fall of 2009. The Redhead duty boots, also from Bass pro, were added in the mid to early summer of 2010; Just before I left for my Alaska ride.

Considering the price I paid, the job they've done and the condition they're in after three and a half years, give or take, of pretty heavy abuse; I still believe I couldn't have made a better choice for my Motorcycle Boots.

You might also notice that the Rocky boots have changed color! I wanted a BLACK waterproof, wellington style boot, and couldn't find one. So! Having been a custom leather craftsman for a lot of years, I dyed 'em to be what I wanted!

I need to say right up front that in spite of having run a professional custom leather shop for a number of years; the care these boots have gotten was less than prime. I have oiled them up with Skidmores no more than three times in all the time I've worn 'em.

With that poor care in mind, I consider the condition they are in is a testament of their construction and quality materials.

Both pairs have seen many, many miles from the Pacific Beaches, to stony trails in the high Rockies of Montana, the slot canyons of Utah and down to the thorny desert of Arizona.

The Rocky Motorcycle boots are now on their last few months... unless I can find a boot shop that can resole at a reasonable price. They are built with the old fashioned design that makes for rebuilding.

The only problem is finding any shoe repair shops that can still do the work! 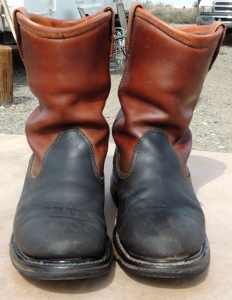 The places of "failure" are these;
The heels are pretty worn. Mostly from draggin' on the asphalt when I scrape the pegs.

The way I sit on my Raider, when I scrape a peg, the first thing that hits is my boot heel.

Since the right side always scrapes more the right heel is worse than the left.

(turn radius is always tighter to the right)

The only other "failure" point is a couple of spots, in just the last few weeks (April '13) where the sole is starting to separate on one boot. Like I said, if I can find a shop I'll have 'em resoled. But that is gettin' more difficult all the time. 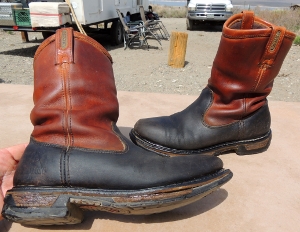 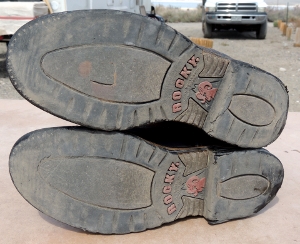 Proving my respect for these boots is the fact that I bought a second pair at Bass pro when I had the chance this past winter. 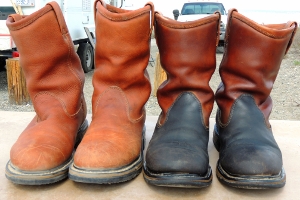 The Redhead Boots have had a little less ground wear than the Rockys and a lil' more bike wear; though they are the best for hiking when I'm off the bike. Their soles have better traction when I'm up on the rougher trails. 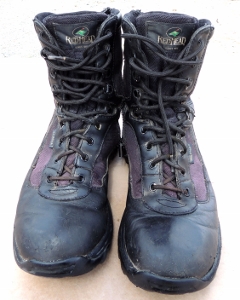 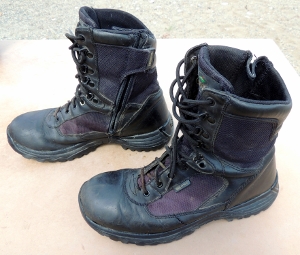 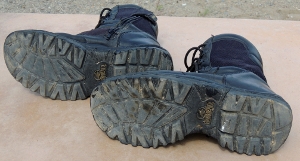 The only failure on them at all is on the side seams on the right boot. That's only occurred in the last week or two.

I plan on finding a tube of Shoe Goo and pumping a small bit into those split seams and squeezing a lil' more life out of these boots. 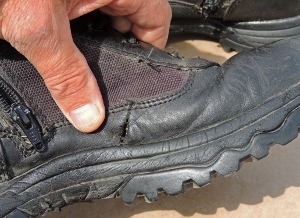 After three years of solid abuse and starting their life with 9000 miles hammering to Alaska and back, with 3000 miles of that 24/7 rain where they were NEVER able to completely dry out, they're for the most part still working.

That said, they owe me nothing! They've kept me comfortable, dry and protected for three years and for a bargain price.

The next time I pass a Bass Pro with enough dinero to load my cart with another pair, I won't hestitate to buy Bass Pro's Redhead Duty Boots.

Copyright 2008 - 2013 motorcycle-touring-the-good-life.com All Rights Reserved Not to be reproduced for commercial purposes without the express written permission of the Author